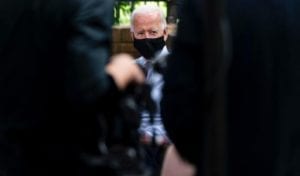 Form or button/link to form for signing.

Prior to the election on November 3, the U.S. bishops did not address Joe Biden’s anti-Catholic position regarding faith and morals as a unified body.

The USCCB, the organization to which every U.S. bishop belongs and which is staffed and led by bishops, remained disgracefully silent in the run-up to the election.

What were the bishops afraid of, losing their charitable tax status with the IRS, or being deprived of fat checks from the HHS (immigration programs) and USAID (foreign aid programs)?

Or, were they just too cowardly to clearly declare Christ’s law to be above man’s law and risk the ire of a Joe Biden as president?

Either way, the bishops’ lack of clarity in this regard is a terrible scandal in itself and probably greatly contributed to the possible election of a pro-abortion, anti-Catholic Catholic to the presidency.

Given the fact that exit polling shows Catholics split their vote 50-50 for Trump and Biden, even a slight deviation in the heavily-Catholic swing-states of Michigan, Wisconsin and Pennsylvania could have produced different results.

The bishops could have spoken out against Biden’s pro-abortion stance collectively, but, again, they were overwhelmingly and shamefully silent.

Because of this, they will be at least partly responsible for the policies advanced by a Biden administration, in the event that Biden is sworn into office.

However, the bishops can, even now, mitigate the damage done by their inaction by taking the following steps: 1) Speak with one voice, as the USCCB, and plainly condemn Biden’s pro-abortion stance; 2) Publicly advise Biden not to present himself for Holy Communion because of his scandalous position on abortion and homosexual “marriage;” and, 3) Tell Biden to publicly repent of publicly promoting the wilfull murder of the preborn, sins against nature, and diminishing the natural family.

Thankfully, some individual bishops have spoken out forcefully on Biden’s scandalous behavior, and his standing in the Church.

On November 9, Archbishop Strickland of Tyler, Texas tweeted: “A dark cloud has descended on this nation when the USCCB and Planned Parenthood speak in unison in support of a Biden-Harris administration that supports the slaughter of innocents by abortion for all 9 months of pregnancy.”

Additionally, Archbishop Samuel Aquila of Denver, Colorado and Archbishop Charles Chaput have both declared publicly that Joe Biden “should not receive Holy Communion.”

But, to add insult to injury, Cardinal Wilton Gregory of Washington, D.C. has said that he will give Holy Communion to Biden because “it’s a matter of the responsibility that I have as the archbishop to be engaged and to be in dialogue with him, even in those areas where we obviously have some differences.”

And, Bishop W. Francis Malooly of Wilmington, Delaware and Bishop McElroy of San Diego also congratulated Biden in statements, but they have not indicated whether or not they would administer Holy Communion to him.

With all due respect to these bishops, they diminish the Holy Eucharist and their high office, as well as cause grave scandal to the faithful, by dialoguing with a man who is promoting mass murder of the unborn against the constant teaching of the Church.

A man who uses the church as a backdrop to make sickening political advertisements about how “Catholic/religious” he is, but, at the same time, says that he will do everything in his power to protect the murder of the innocent, needs to publicly repent before dialogue can begin.

The bishops should not dialogue with or congratulate someone who has publicly betrayed the Church’s teaching and who is leading others astray.

It’s an embarrassment and a scandal for the bishops to continue to allow him to receive Holy Communion.